Why You Need to Adopt Edge Networking

What does edge networking mean to your enterprise? Does it mean fast service delivery to hundreds of remote locations? Or smooth networking & security for your work-from-home staff?

When your organization uses strong edge networking capabilities, you can adapt well into the future no matter how much you need to scale. This allows you to save time & money, allocate resources efficiently, and provide reliable connectivity across your enterprise.

Click the link below to hear John Paul Kang, one of ZPE Systems’ Solutions Architects, discussing edge networking and the benefits it brings to business. 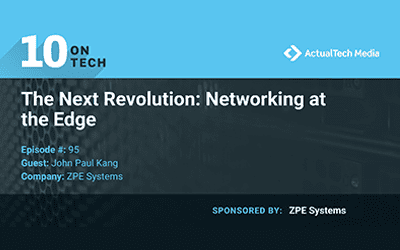 095 – The Next Revolution: Networking at the Edge

If you’re short on time, read this post for a glimpse of what’s in the podcast.

What exactly is edge networking?

Edge networking is how distributed locations connect back to an enterprise’s main systems.

Traditional enterprise network setups employ a main data center, which is at the core of the network, and then distributed locations, which are at the edge. Edge networking refers to the systems and infrastructure that connect these edge locations back to the core.

If you think about a centralized network, the edge is what is located at the fringe or periphery.

Again, looking at a traditional, centralized enterprise network, you can see that all of the computing and storage happens at the core. This core is what processes all of the information, including everything that comes from the enterprise’s edge networks.

Edge computing, however, is essentially distributing some of the core’s processes to the edge, in order to alleviate the core’s workload. Instead of having all computing workloads, application services, and data storage take place at the core, these processes (or parts of them) are handled near the edge. Once the edge computing systems process the information, it’s then the job of edge networking to transfer the information back to the core (if necessary).

Edge networking brings a lot of benefits to the business, and it’s easy to understand why organizations are evolving their edge capabilities. The easiest way to realize its advantages is by comparing it to the conventional methods of centralized networking.

In traditional network configurations, you put a lot of strain on your core systems. This is because you have to backhaul all of your edge traffic to the core for processing. The results? Bottlenecking, slowdowns, and increased risk of bringing your network (and business) to a standstill.

Just imagine you and some friends using a funnel to fill a bucket with marbles. To represent traditional networking, all of you would essentially put your marbles into the same funnel. This would lead to plenty of waiting and likely cause a jam or stoppage, which would require you to manually troubleshoot and fix.

But with better edge networking, you can decentralize and redistribute your workload. Using this cloud-based model, you no longer need to backhaul traffic or bog down your core systems. You can move your critical networking and security functions to the edge. Paired with edge computing, you get more balanced workloads and efficient bandwidth usage for faster speeds, more responsiveness, and improved performance across the board.

Back to the bucket of marbles analogy. To represent better edge networking, you would not only have a single funnel at the core, but also individual funnels around the periphery. Instead of dumping all the marbles into the center, you would be able to take advantage of the outer funnels to achieve a more efficient system free of frequent stoppages.

Having better edge networking capabilities means you can overcome a lot of the challenges of a centralized system.

Edge networking comes with some obstacles

Get over these obstacles using new technologies

To improve your edge networking capabilities and get past the inherent challenges, use some of the latest and most innovative technologies:

Want to learn more about the edge? Browse our blog
Take a look at some of our other posts to learn more about edge networking. Get a closer look at SASE, zero touch provisioning, and remote out-of-band, and see how you can strengthen your edge capabilities.